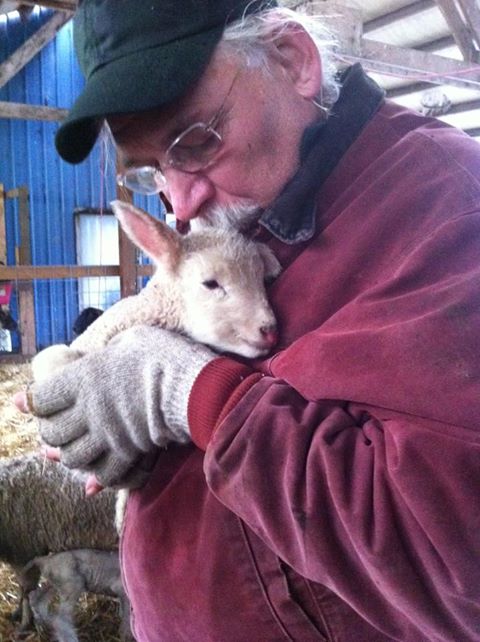 Things come and go on the farm.  Some days are truly a blessing, and some days we are just glad to have gotten through them.  Last Sunday proved to be a just get through it day.  When the early light of morning overcame the darkness of night, looking out through the living room window Sarah saw a very pregnant sheep laying on her side barely moving.   We quickly went outside and waded into the high spot in the field where she was laying between two flood swales left over from days of near-record rain.  The sky very dark, the ground so saturated that when one stepped on the grass in the field,  the shoe quickly penetrated the sod and went into mud, we moved to the ewe .  When we arrived it looked that the ewe had given her all and could do no more to help her yet-to-be born son out into the world.  Two tiny feet and the tip of the nose were sticking out of her vagina and a tiny pink tongue was trailing down his chin.  There was no movement – he appeared to have died.   Wanting to save the ewe, I took one foot and slowly pulled until it came out fully extended, then the other, with similar results.  The head was still stuck, and reaching inside I got a grip on it and pulled it free.   Sarah noticed at this point that the ewe began moving and trying to help with contractions, so we waited until the next contraction started and I pulled steadily while Sarah calmed mama and held her from sliding across the field as I pulled.  The lamb came free up until his back hips hung up inside the ewe.   We waited for the next contraction and mom grunted and pushed, Sarah held and I pulled, and out on the ground laid an enormous, wet, dead lamb…well, maybe not quite so dead.  He landed in a mud puddle about an inch deep.  The cold water seemed to have stimulated him and he began to move.  Sarah and I looked at him, barely able to believe our eyes as he called for momma.  Momma heard him and went from near dead to standing up and turning to say hi to her newborn.  Momma, having been through this before, told us by her actions that our services would no longer be required.  After all that… this our repayment?!?  No first thing coffee. No breakfast, no Sunday morning setting a spell in front of the wood stove.  Oh, and by the way, Mrs. Ewe said, the horses are hungry.  So get over to the barn to feed those malcontent food bags.

As we walked out of the field on a swale that was high enough to keep us out of the low spots that were flooded, Sarah noticed two small white objects in the depths of the water.  A closer look revealed that there were two tiny bodies that the day before had been two-day-old lambs.  It appeared that they had tried to follow their Mom from one high spot to another high spot in the field and had been overtaken by the current and cold, eventually succumbing to hypothermia and drowned.

One-step forward and two steps back.  Whenever something like this happens, we automatically blame ourselves for not taking care of things better.  We were devastated.  This lambing season has not been stellar, mostly due to the extreme weather.  It is not for loss of revenue that we are sad; it is the senselessness of losing such a young animal.  Even knowing the eventual fate of this animal – it was destined to become food…it just did not seem fair.

Sarah once read me a passage out of a “How To” book for raising goats.  The book said, and I will never forget this, “many goats will die before you get this down.”  I just never figured after this many years we would still be losing animals to things as stupid as this!  With farming, there will be days like this, and there will be days when the weather is a blessing and six wobbly-legged little lambs will come into this world without a care in the world…like today, which is what it all about.